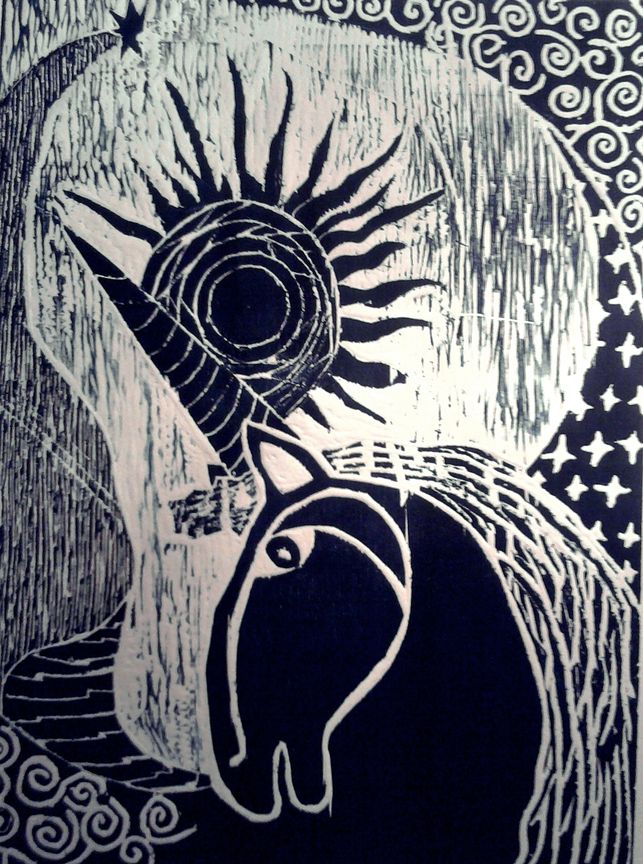 “A Chinese prose writer has observed that the unicorn, because of its own anomaly, will pass unnoticed. Our eyes see what they are accustomed to seeing.” (Jose Luis Borges)

In Spain, May is school exam month, and the 15-M movement is no exception. The celebration of its 2nd anniversary is an auspicious occasion for a bit of media judgement: Is 15-M still alive? Have they withered or grown? And what have they achieved? Their eyes see what they’re used to seeing:  the event, not the process, identity, not metamorphosis, the spectacular, not the everyday, macro, not micro, quantity versus quality, results, rather than effects. The clinical view, the outside view, the paternal view; and the biggest problem is that we internalize these views, and conform to their standards. That’s why, the the other day, a friend protested by saying, “Screw the anniversary, we fight everyday, we could just as well celebrate on the 3rd of February or the 11th of June. If the media has pronounced us dead, fine, now we’ll be able to work in peace!”

A unicorn is not quite a horse. Likewise, neither are 15-M, the Mareas (Citizen Tides), the Plataforma Afectados por la Hipotéca or PAH (Spain’s game-changing anti-foreclosure movement) the familiar social movements, but names and masks endowing the users with a truly unprecedented process of social politicization. At once constant and in flux, a metamorphosis. The challenge isn’t in how to respond to the media’s endless lies and cilchés, but in learning to see ourselves, and tell our story differently. To learn to name, give value and communicate all that’s extraordinary about how we live, and what we do.

The current political situation, the personal impact brought to actions, protests and organization – today´s social malaise is shared not only among friends in bars, but among strangers in the street. They are spurred into action. This isn’t mechanical, automatic, or necessary, it shouldn’t be this way. In fact, this isn’t happening in other European countries affected by the crisis/scam. More usual is the widespread sense of fear, resignation, guilt and individuation. That’s the process of neutralization achieved by spreading the official line, “we’ve lived beyond our means”: we’re sinners with no right to protest, we can only find atonement through punishment. Thus we welcome with open arms the cuts of Rajoy and Merkel (allowing them the role of the punishing father). But that narrative has failed to emerge as the new hegemony. What was once private is now common and shared. Depression is politicised. While the belief system that fueled our existence (property, success, consumption) sinks into oblivion, we strive, together, to create a new one. We set out from the spaces we inhabit to take charge of this collective situation. Accountability versus guilt (in fact, and likely thanks to this, the assumption that suicide rates are on the rise due to the crisis doesn’t quite hold up to statistical analysis).

Hippies, public workers, firemen, police, medical staff, judges, teachers, ordinary people…the participants in 15-M, PAH and the Mareas are the 99%. These struggles aren’t collectives of like kind, but rather inclusive of various elements, and all for the common good. First, they unite people of diverse ideologies around common values and concrete objectives. This effectively neutralizes the contrived clash between the “two Spains“, so useful to the powers that be. Secondly, they break the traditional split between political actors and spectators: the backbone of the education-focused Marea Verde (Green Tide) includes parents, teachers and pupils. Marea Blanca (White Tide), which protests against fiscal cuts and the privatization of Spain’s public health system, includes doctors, medical staff and users. Meanwhile, the PAH unites foreclosure victims with activists of varying backgrounds and everyday people. The list goes on. Finally, they share mutual moments of public protest (like the last 23rd of February), modes of action (assemblies, traffic stoppages, lock-downs) and a common narrative on the present situation in Spain: “We are not commodities in the hands of politicians and bankers”.

This isn’t mechanical, automatic, or necessary, it shouldn’t be this way. What’s expected is self-referencing, and material or ideological fragmentation. Struggles that go about their business, never aligning with others, lacking a common concern about our world; never coming up with viral possibilities for collective action, never going beyond the strictest of definitions for any problem. That’s what’s to be expected. Recently, a Greek activist passing through Madrid remarked that Syntagma square has always been divided amongst groups: anarchists, communists, etc. He was surprised when told that in the 15-M squares, we create an open and inclusive community where differences are both recognised and transcended.

And, isn’t the 99% vs. the 1% narrative, this resymbolization of the commons from the ground up, what may have squashed the possibility of a Spanish version of Greece´s Golden Dawn, with its scapegoats and street violence, from ever being born? The Greek activist explained that the neo-Nazi group is very much sponsored by the police. He was flabbergasted when we listed the some of the unheard-of gestures we’ve seen coming from some agents of the law: protests, criticism against politicians and higher-ups, acts of disobedience, the refusal to carry out foreclosures, etc. You find your enemy above (1%), not by your side.

What is expected, as mass media keeps reminding us, is for a “social explosion” to take place. We’re not quite sure what they mean by this, but lets hypothesise: looting and pillaging, an uncontrollable rise in delinquency and all out war. Consequently, the state’s authority as the necessary arbiter of society would once again be legitimized. It isn’t happening. On the one hand, a new network of formal and informal social solidarity has been created, dealing with material concerns such as precariousness and poverty (everything from economic solidarity networks, to networks of everyday family and friends). On the other hand, what those on high usually call the “anti-political” (I’m thinking here of PAH) can work social malaise into collectivity, creativity and dignity, reviving happiness even in the midst of desperation.

In “The Shock Doctrine”, Naomi Klein explains how “disaster capitalism” takes advantage of social panic and depression to catalyse a leap towards the neoliberal transformation of society. In Pinochet’s Chile, in Post-Soviet Poland, in Katrina-devastated New Orleans, a melting pot of repressive and economic shocks left whole populations knocked out, wrecked social solidarity, spread paralysis, resignation and fear of others, all of which fostered dependence on a protective father figure. The main objective of the Shock Doctrine, as explained by Klein, is to sweep away autonomous narratives, and the ways and customs by which common people make sense of their world. Advantage is then taken of the ensuing confusion, to push “every man for himself” as the dominant definition of reality

The Shock Doctrine hasn’t quite triumphed in Spain as it should. We can see it in the inherent irritation evident in neoliberal economists’ analysis of Spanish society and the crisis. Their problem with us is our persistent refusal to see ourselves as isolated atoms, with neither collective rights nor close ties among people or places, motivated only by notions of success and individual self-realization (using terms like “normative rigidity”, “insufficient geographical mobility”, “limited entrepreneurial spirit”, “parental financial cushion”, etc.)

There’s no shock because there’s politics. According to French philosopher Jacques Rancière, politics makes three moves. First, it interrupts what’s perceived as inevitable (this-is-the-way-things-are, it’s-the-economic-crisis, there’s-no-money, we’ve-lived-beyond-our-means…). Second, it creates an alternate map of what’s possible: things we can possibly feel, do or think. For example, taking notice of a foreclosure and forced eviction where, otherwise, we wouldn’t have seen anything but the “routine execution due to lack of mortgage payment”. Being able to feel that foreclosures are intolerable, incorrect, unnecessary and not inevitable, and they concern us all. Goading us to band together and stop them. Third, it invents new political subjects: redefining who is able to see, feel, do or think. Politics is not the expression of those subjected to earlier or preconstituted constructs (whether ideological or sociological), but the creation of subjective spaces where none existed before, where the supposedly “incapable and ignorant” speak up and take action, turning from victims to actors.

Politics allows us to map a new set of connections. The fact that there are many groups doing many things in Spain isn’t as profoundly relevant as the fact that a climate of politicization that transcends social divisions has been created. At once it is a highly charged, conductive space where words, actions and affections circulate; an ecosystem that’s more than the sum of its parts; a field of forces and resonances; and a common sense-building tale of what’s going on (with us). The air is charged with electricity.

We can only see what we’ve been habituated to see. The normal, never the impossible. But, since the 15th of May of 2011, we’ve been living the impossible. Contemptuous of all probability, inevitability, destiny. Therefore we need a “belief in the impossible”. A school of thought to break us of seeing what’s habitual to our eyes, so we can see (and value) what’s happening and what should not be happening, what isn’t happening and (by logic) should be happening. A de-naturalizing school of thought, the ability to see creation where before there was repetition, action rather than social or causal determinism. To feel the power of our actions, to make it persist and grow in unpredictable ways.